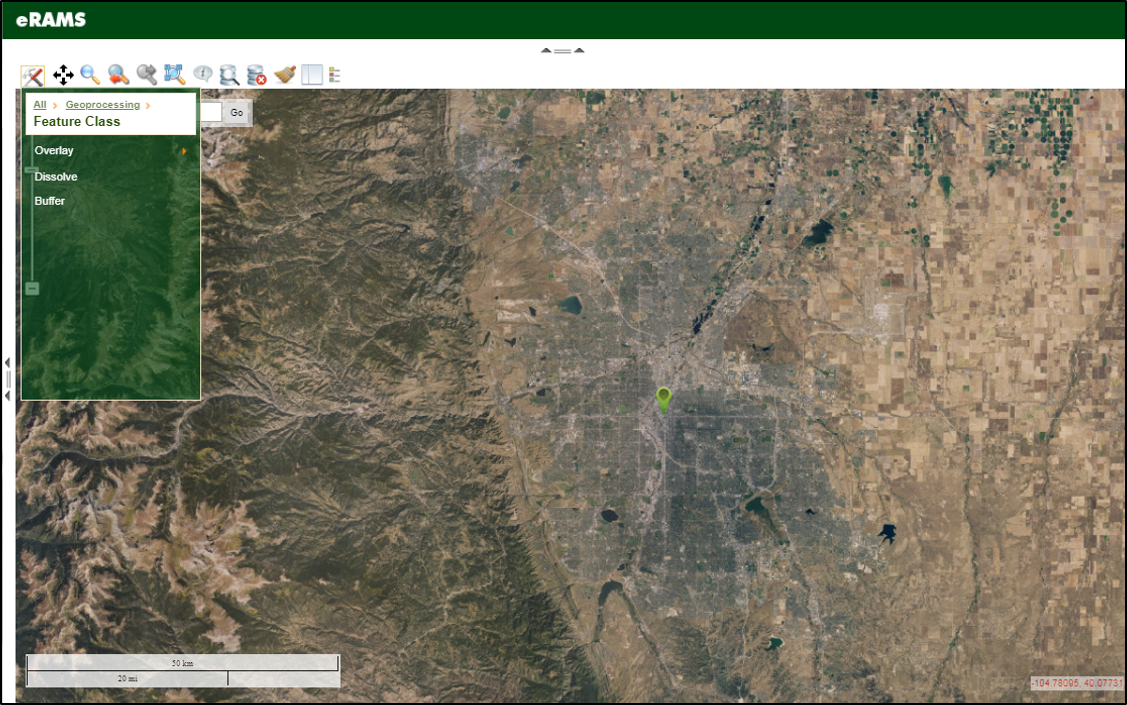 Feature class geoprocessing tools perform operations that use the geometries and attributes of two or more input feature class layers to create an output layer to meet the needs of the user. Options include:

Below you will find detailed information on feature class geoprocessing operations provided by the eRAMS GIS interface.

Overlay geoprocessing tools for feature classes perform operations that use the geometries and attributes of two or more input feature class layers to create an output layer to meet the needs of the user. Four different overlay operations (clip, intersect, union, merge) can be performed following a similar step-by-step process:

The Layer(s): drop-down menu displays several options for selection of layers to use in each operation:

Once the layer(s) are selected and appear in the Geometries: list in the pop-up box, click the operation button. A pop-up dialog box opens to confirm the success of the operation and where the new file is stored. The default filename for the new output feature class layer will appear under the Result: section of the operation pop-up box. Click on the pencil icon to add a display name to the resulting file, type in the new name, and click Save. The pop-up boxes can be closed by clicking Done/Ok.

The available Geospatial/User/Project feature class layers to which the clipping operation will be applied are shown in the Layer(s): drop-down menu. Click on a layer to select it.

New spatial information can be generated by the intersection of features. Click Intersect and the Intersect Geometries pop-up dialog box will appear.  Both the Layer(s): and Intersecting: drop-down menus display several options for selection of layers for the intersection operation.

The Intersecting: drop-down menu is used for selecting which layer or object will intersect the Layer: of interest. The output layer contains attribute information from both the Layer: and Intersecting: files.

The Union tool will combine feature and attribute information from a set of polygon input feature class layers. The output of this process contains attributes of each of the input layers and combined attributes for areas of unique intersection between the inputs. Click Union and the Union Geometries pop-up dialog box will appear.

The Merge tool combines multiple input feature class layers of the same geometry type into a new merged object. The feature class layers to be merged do not need to overlap. The new feature class layer file will retain all attribute information from the merged layers, the input geometries will not be modified, no new features will be created, and the boundaries of each object merged will not physically change. Click Merge and the Merge Geometries pop-up dialog box will appear.

The Layer(s): drop-down menu displays several options for selection of layers to join using the Merge operation. Only features with the same geometries may be merged. Also, user-created polygons, lines, or points should be added to the Geometries: list after other layers are added.

The Dissolve tool aggregates feature class layers by combining adjacent polygons that have a common value for a specific attribute. It essentially is a tool for removing or aggregating small polygons to larger units. To use the Dissolve tool:

The Buffer geoprocessing tool creates a buffer polygon of a specified distance or width around an input feature such as a point, line or polygon.