Breaking out of silos

By Gary Pivo and Mazdak Arabi

The United States is one of the most urbanized nations in the world. More than 80% of us live in cities. Consequently, the quality of our lives depends on how well we manage urban storm-, waste-, and drinking-water. Perhaps that’s why Americans consider water the leading environmental issue and why nearly half of us worry a great deal about it, according to a 2014 Gallup poll. 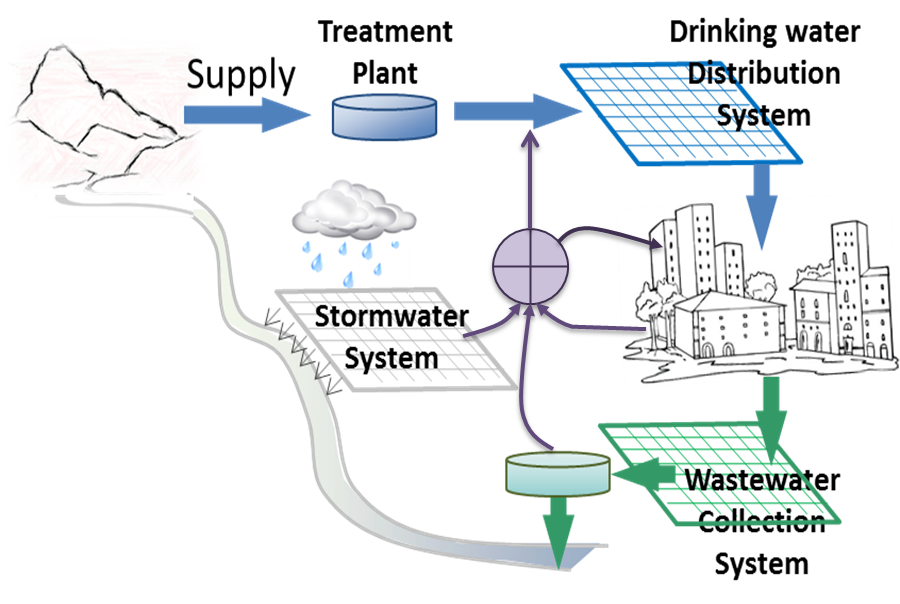 Urban water systems keep our cities healthy, safe, and livable. But in doing so, they can damage natural resources, drainage, and ecosystems and use vast, expensive infrastructures. In the process huge quantities of energy, nutrients, and landscapes are lost or degraded. Too often, our water systems exemplify the linear “take-make-waste” paradigm common to modern cities.

In the past, this linear approach was acceptable, affordable, even best practice. But pressures to protect ecosystems, green cities, improve equity, lower costs, and mitigate hazards have inspired new ways of managing water that follow a more regenerative make-use-return paradigm. The goal is to deliver high levels of water services at lower cost to the triple bottom line, while providing co-benefits to linked human and natural systems.

The new paradigm has been called Sustainable, Total, Integrated, Water-Sensitive, and Soft Path water management. But here we’ll use the name adopted by our Urban Water Innovations Network (UWIN) and others – One Water.

Despite the many examples where One Water tools are being used, they remain uncommon. In terms of innovation theory, they have been created by innovators and used by early adopters, but have not “jumped the chasm” to be mainstreamed by the early/late majority (Moore 1991). Until that happens, One Water will remain more of an exception than the rule.

A key challenge to jumping the chasm is that many One Water solutions require changes to the timing, location or design of urban development. In one study, for example, Miguez et al. (2015) found that decentralized stormwater controls fail in the long term if they are uncoordinated with land-use planning. Other examples where One Water solutions are linked to urban form include preserving wetlands, xeriscaping subdivisions, and channeling growth away from recharge areas. This is a problem because urban development patterns are not controlled by the water managers who champion One Water solutions. Urban planners (and others) govern land uses, green spaces, site planning, street standards and more, while urban water managers are utility officials, the people who run stormwater programs and others with a role in handling water. Urban planners work in planning, zoning and development departments or firms, while water managers work in water-related departments, utilities, agencies or consultancies. This creates another kind chasm to be bridged – the one between urban planners and urban water managers.

This is not a theoretical concern. It is easy to find references to the gap between planners and water managers in agency materials. For example, “Nassau County [stormwater management] does not issue building permits, and therefore is not the regulatory authority on construction and post-construction runoff. Instead, that authority rests with the towns, villages, and cities…” Translation: we have the responsibility without the authority; a famous recipe for failure.

The gap between urban planners and water managers is one example of the fundamental conflict between the comprehensive, multidisciplinary and multi-stakeholder nature of “place-making” and the conventional organization of local governments into sectors with separate professionalized experts, administrators, and mandates (Healy 1998). Traditional water management has seldom if ever made a concentrated effort to shape the cities they serve. A water manager telling a city how to develop is considered taboo. However, urban elements, such as site design, land use, streets, and building technologies impact water demand, runoff and discharge (Baker 2003, Chang et al. 2010, Shandas and Parandvash 2011). Therefore, mainstreaming One Water solutions will require new partnerships between the water managers who promote them and the urban planners who plan for growth, review new developments and shape our urban futures.

Bates (2011) called this disconnect a “governance gap”, owing to differences in the scale at which water and urban planning occur. But there is more to the issue than scale. There are divergences in governing bodies, legal mandates, social networks, professional cultures, stakeholders, priorities, and finances. There is evidence emerging, however, that “policy learning”, as in the case of communities working toward One Water solutions, improves when separate professional or policy networks join-up to share insights and capabilities as illustrated by the social network maps in Figure 3 (Henry 2009):

The disconnect between urban planning and water service professionals illustrates the stove-piped professional thinking and impediments to interagency cooperation that are known problems for One Water transitions (Brown and Farrelly 2009, Daigger 2009). There are other impediments, including uncertainties about effectiveness, perceptions about risk, practical management challenges, financing problems, and institutional or personal biases. However, “it is broadly acknowledged that the inertia associated with administrative systems is possibly the most significant obstacle…” (Brown 2008).

Our team is currently investigating ways to bridge the particular gaps between urban planning and water management that help keep One Water solutions from jumping the chasm to mainstream adoption. A holistic, rigorous and professionally grounded assessment is used to find out where and why these gaps exist, where and why integration occurs, where further interaction would produce the most gains, what tools or programs would best foster integration, and how further actions should be prioritized. Places that are reluctant and places that are enthusiastic about sustainability are considered. The analysis accounts for the financial, political, cultural and physical diversity across settings. A long range view is taken by considering, for example, how we might train future professionals, and a short range view by asking what should be done now to help cities deal with emergencies and make smarter investments today.

“Policy Integration” or “Joined Up Policy” has been described as “the management of cross-cutting issues…that transcend the boundaries of established policy fields, and which often do not correspond to the institutional responsibilities of individual departments” (Stead and Meijers 2004). It involves the integration of policy, plan and program making processes (PPP) (Smith 2014) and as such refers to all decisions, from policy to operations. It contrasts with cooperation, which merely involves dialog and information, and coordination, which involves cooperation plus attempts to avoid conflicts but not necessarily share goals.